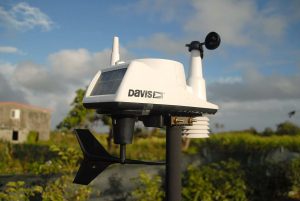 Whenever we wish to find out about weather conditions around us, our first instinct is to get on a search engine and look for the updates. You might also scroll different weather news channels on TV to get a detailed opinion. These options are good for a vague update but you might have noticed that they tend to be inaccurate more often than not. However, a weather station is where your quest for climatic conditions ends. It can be installed in your house and through the sensors, it gives unerring information which helps you considerably. In the world of weather stations, Davis Instruments sits at the top as they started revolutionizing the way you get weather updates.

One such product that comes out of Davis Instruments is the 6250 Vantage Vue Weather Station which has been the ideal choice for the consumers. It has been custom-made for first-time users who are not using it professionally and buying it for timely weather updates. It can give you inside and outside updates for many variables like temperature, humidity, barometric pressure, rainfall, wind direction, wind speed, and so on. All you need to do is set it up nice and proper and you’ll be good to go.

What’s In The Box?

6250 Vantage Vue is not a huge gadget and thus doesn’t require a gigantic box. All its components can be fit in a normal-sized box and you have to assemble them. The parts which you would receive in the box are as such:

Integrated sensor suite which has the sensors of:

You would have noticed that there is no tripod or a mounting pole to set it up. They can be bought from Davis Instruments itself or any other place. It shouldn’t be troubling as you can make yourself a holder as well, considering the small size of the device. Following the know-hows of the contents, it’s time to take them out and get your working gloves on.

How To Assemble The 6250 Vantage Vue?

Good things don’t come easy and thus you must take your time while assembling the 6250. The box contains various nuts and plugs which can be tiresome to even look at but they should be easy if you follow the instructions given in the manual. Just take 30 minutes out of your schedule, go step by step through the set-up process, and you won’t be disappointed.

There is a desktop console with the glow-in-the-dark keys to help you see in the low-light as well. It needs to be set up too as it replaces app or web-based connectivity. This might seem a hectic job as well but it can be done with ease.

First-Hand Experience Of The 6250 Vantage Vue

There is an integrated sensor that measures the temperature/humidity. It is covered with radiation shielding so it would protect the sensor from too much direct sunlight. Sunlight can cause fluctuations in measurements and can give inaccurate data but the shield helps, which cannot be found in most of the sensors. Shield also protects the sensor from humid conditions so it wouldn’t show incorrect data after heavy rains. There were some instances when data was not flawless but it shouldn’t be much of an issue as there was a minimal difference.

Integrated solar panels charge up the weather station during the day through solar energy and the energy is stored for power supply at night. There is a lithium battery backup as well, though you would hardly need it with the power-packed battery it encompasses.

There is a frequency spectrum of 902 to 928 MHz. Davis 6250 Vantage Vue can use multiple frequencies through this which makes it possible for its transmission range to expand up to 1,000 feet, which is much more than an entry-level model. There is a wireless transmission of data from sensor suite to the console which would mean you don’t have to tangle into the wires.

Rain gauge is installed within, and just like most weather stations, there is a cup placed that collects the tips of rain and measures rainfall. The cup is smaller than the cups in other weather stations, which works in the favor as the measurements are more accurate in comparison. Rainfall is measured in 0.1-inch increments and it empties itself.

Anemometer can record the wind speeds from 2 mph to 150 mph which is within the range of winds in most areas. You should consider going for something else if you live in the hurricane-prone areas as this would not be able to cover it. Wind speed is updated every 2.5 seconds and gives the average in 2 to 10-minute gaps. Numbers can be seen in kmph, mph, mps, or knots.

If you own a 6250 Vantage Vue, you can later expand and upgrade to Vantage Pro2, which is some steps ahead. 6250 has radio compatibility which makes it possible to create numerous weather stations rather than just one. If you look to buy Vantage Pro2 soon, you can combine your 6250 with it. This additional feature would be very beneficial as you can have even better readings.

The dimensions on the LCD console are easy to read and have a user-friendly keypad. There are various forecast icons for rainy, cloudy, sunny, or snowy environments. There are 8 phases of the moon displayed on the screen, ranging from full moon to new moon which is aesthetically pleasing. To warn you about the thunderstorm, floods, heavy rains, freezing temperature, etc., 22 alarm tones are installed, each varying for a different factor.

In addition to all these, there is also an interesting feature “This Time Yesterday” and “Change in weather since yesterday”, that tells you how the weather has been today in comparison to the day before. It encompasses numerous variables and provides you with comparative data.

How Is The Internet Connectivity Of The 6250 Vantage Vue?

Internet connectivity of 6250 Vantage Vue is possibly the only thing that lags. There are no options to connect it with a device or a smart home. However, if you still need the information on your computer, you should buy the WeatherLink Connectivity Kit. WeatherLink data logger is a dongle that allows you to send the information to your computer without needing the internet. You can also upload the data on your weather page and provide updates to readers. This is particularly useful in case you are out for a trip but want to keep a check on weather readings.

Considering the measurements and readings through sensors, almost all of them were quite accurate. The comparisons were made to the National Weather Station which showed very minimal difference but certainly better than other weather stations. Internet connectivity disappointed us but the fastest readings with minimum time intervals compensate for it.

The console looks outdated and not very satisfying to the eye but the inside shouldn’t be judged through that as measurements are more than satisfying. However, if you do have extra bucks upon yourself, you might want to go for Vantage Pro2 as it is certainly an upgrade. In case you are a weather enthusiast, go for the better and advanced models as 6250 Vantage Vue targets the first-time users and is the ideal choice for them.