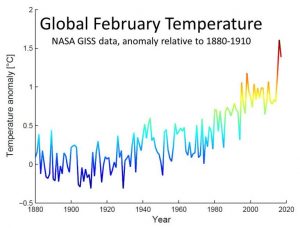 [updated 26 July] We witness a prevention of enhanced ice sheet mass loss this year (2017) because of extra snowfall. With more moisture in Earth’s atmosphere due to warming, the extra snow is consistent with climate change.In the graphic below, we see:1.) well above normal snow accumulation on Greenland starting with heavy snow in October 2016 and 2.) a 27 June – 5 July ‘mid summer’ snowfall. [update 3. another mid summer snowfall 15 July) are punctuating melt.

At this critical point of the year, mid melt season, the surface mass input (SMB) is 1.3x (or +150 Gt) above normal. By comparison, in the record loss year 2012, the mass input (the Surface Mass Balance, or SMB) was roughly 1.3x below normal.The extra snow cover and associated high to average albedo is maintaining the ice sheet.

It is now likely 2017 will see below average ice loss (at the surface, due to melting). And this is despite strong early and late May melt episodes due to overall warmth in May. We have seen below average Greenland June air temperatures despite warm temperatures over Siberia, the Arctic Ocean, Alaska, etc.

See graphic below how the albedo over the ice sheet declines through the year, as normal, then the 27 June to 5 July jump in the blue curve ‘reflects’ (pun intended) mid summer snowfall.

The punctuation of melt this year is not necessarily enough to offset the other source of ice mass loss: iceberg calving. Yet, as compared to the ‘melt pause’ year 2013 (see GRACE satellite data below), I would not be surprised to see the ice sheet have a no mass loss year in 2017!

Cores show more snow with climate warmingI found and published a robust Northern Hemisphere air temperature correlation with Greenland accumulation from ice cores (Box et al. 2013). The relationship has a slope of 7% per degree C of Northern Hemisphere Air temperature increase, lying on the Clausius-Clapeyron vapor pressure curve, reinforcing that we can expect more snow in a warming climate (Kapsner et al. 1995) and in agreement with the IPCC AR5 Chapter 12 simulations above.

Danish Meteorological Institute: Jesper Rosberg explains, “we have seen a persistent positive North Atlantic Oscillation this summer and the jet stream has been very far south of Greenland with very cold air over the ice sheet, so the precipitation falling this summer has mostly been snow, rather [than] rain.”

Still, with global atmospheric absolute humidity rising due to warming, now all weather systems form in an environment that is wetter and warmer on average. So, as I see it, it’s simple to expect the average weather system to dump more precipitation, whether that is rain or snow.

Indeed, over Greenland, we already find more rain at the expense of snow with climate warming. However, the increased rain is concentrated at the lowest 1/3 of elevations around the ice sheet periphery and anyway is so far not at play this year.

So, I’ve presented that in a warmer atmosphere, higher absolute humidity, increased potential (and actual) precipitation rates… We see a global pattern of precipitation increase. Now, what may seem ironic is that soil moisture can decrease in a warming climate despite increased precipitation. How? evaporation rates increase more than soil recharge rates. On glaciers in the Arctic, we still get more net ice loss. Why? The increase in melting is larger than the increase in snowfall. So, warmer Arctic, more snow, is an example of a negative feedback.